useeger wrote:Imagine that you have to write an English text from right to left and then take it with a macro in the correct order. Is that practical?

For new Hatra texts, I think it would be easier to [1] create a short right-to-left paragraph “CBA” by running the macro with “ABC” selected, [2] select “CBA” by double clicking on “CBA” and [3] begin to type. With the base paragraph “CBA” registered in a glassary, you can insert it easily.

Another thought. I’m not sure if this will work as expected but I tend to think it to be possible to convert your Hatra font into a fake Hebrew font so that it works as a font of right-to-left language, by assigning “Hatra A” to U+05D0 (alef), “Hatra B” to U+05D1 (bet), and so on.

I noticed that Hatra font contains two sets of alphabets, one without ring and the other with ring. For the latter set, I think it would be practical to use an OpenType feature called “liga” so that alphabetical letters followed by “ring” are displayed as those having ring above, using glyphs made by you. In that case, you have to add U+030A (Combining Ring Above) — perhaps it would be safer to assign it to a codepoint of a certain Hebrew diacritical mark — to the font, create a conversion table like the one below and add it to the font. That is not difficult with a font editor supporting OpenType fonts, like FontLab Studio.

You don’t need to give any Unicode value to alefring, betring, gimelring, etc. For numbers with ring, the same trick should work.

BTW You can do the sama with characters such as “d with a line under and a dot under the line” by adding something like this to “liga” table.

As for the other characters, you can assign them to proper Unicode codepoints.

Also, you will have to create a keyboard layout for the font, for example, by modifying Hebrew-QWERTY but you are experienced.

Right now, I don’t have the time to play with a font, but if you are not so in a hurry, I think some weeks later I will be able to try to convert Hatra font as explained above. Also, I think I can write a macro for converting documents written in the original Hatra font.

EDIT: Corrrected typos: “CAB” should have been “CBA”.

Kino wrote: For new Hatra texts, I think it would be easier to [1] create a short right-to-left paragraph “CBA” by running the macro with “ABC” selected, [2] select “CBA” by double clicking on “CBA” and [3] begin to type. With the base paragraph “CBA” registered in a glossary, you can insert it easily.

Indeed, it works!! This is really practical!!! Now I can work as in former time with the esreveR-tool. I can't understand it, it's like magic: you added the esreveR-functionality to NW Pro!!!


Kino wrote: Another thought. I’m not sure if this will work as expected but I tend to think it to be possible to convert your Hatra font into a fake Hebrew font so that it works as a font of right-to-left language, by assigning “Hatra A” to U+05D0 (alef), “Hatra B” to U+05D1 (bet), and so on.

This was also my first idea, when I started to rack my brain. But this Unicode stuff ist so complicated and I don't have a Unicode font editor. Micheal Elverson is working on it now, let's wait and see what comes of it.

Thank you very much, you solved my problem
Ulrich 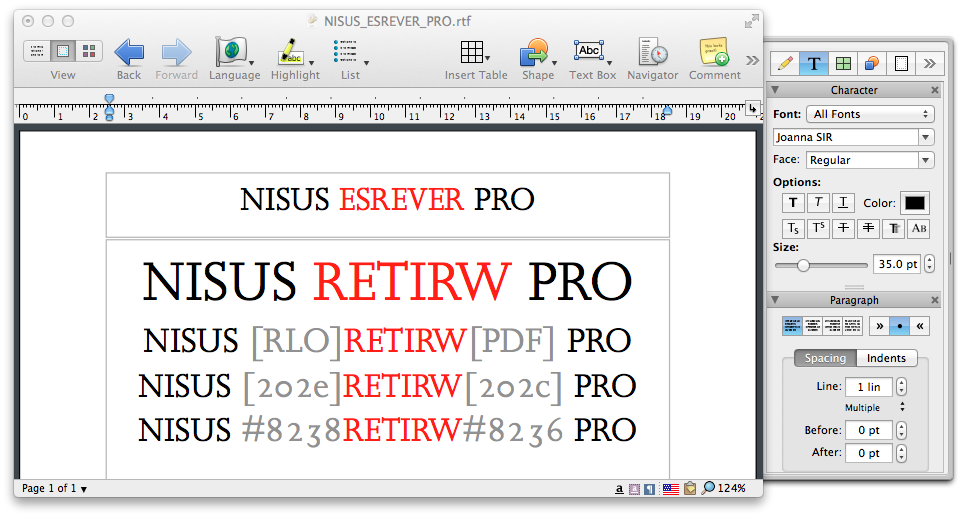 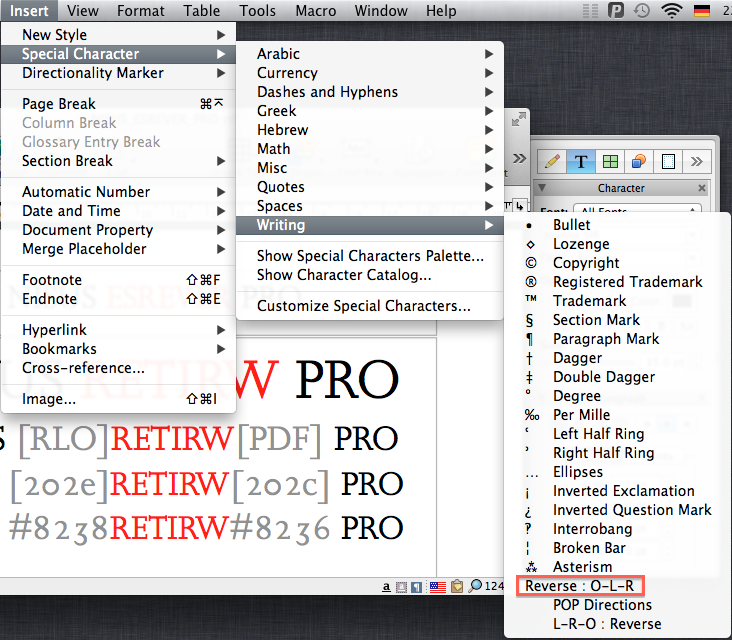 And then : ANY FONT WILL DO! 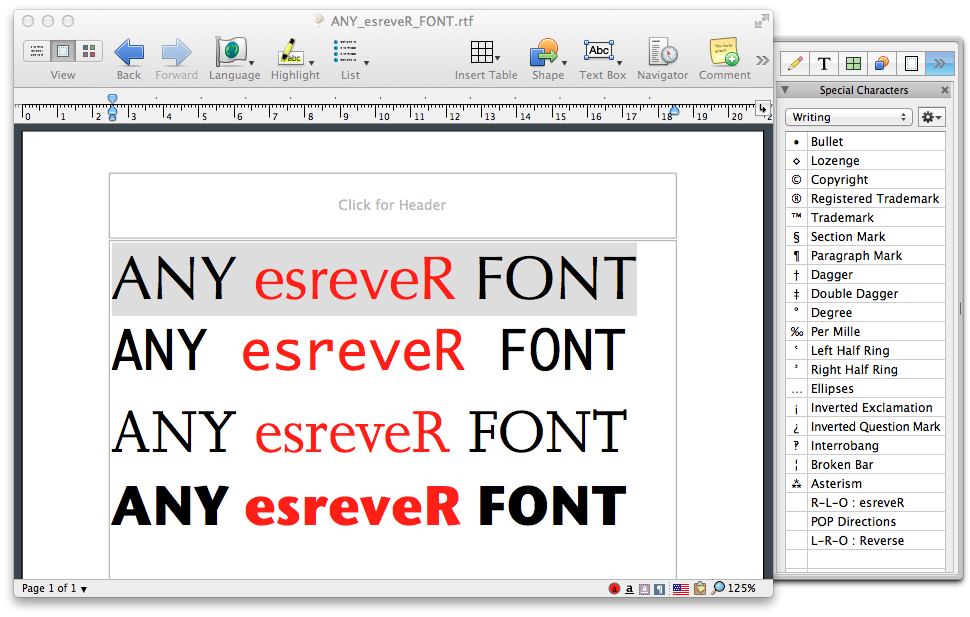 Tried it and anything works exactly like you described it. You guys are fantastic!!!

It think it should also be easy now to add a command "esreveR" in the Format menu.

Thanks a lot!
Ulrich

Can you write the macro in a way that the word will not be swiped to the right, in other words, let the selected word be reversed in its location.
thanx,
Windsor

I tried to follow your screen shots, and tried a sample, all got was deletion of the selected word !!

Tried on one word, by selecting it, then in insert menu -> special characters -> writing -> R-T-L Override (and tried the other two) and the word disappeared!

Obviously I have done something wrong. Could you help?

here is what I did:

1) In the NWP Menu "Insert/Special Character/Customize Special Characters…" I choose to edit "Group: Writing"
2) Under "Character" I then added from "Character Viewer: Unicode: General Punctuation: 202e + 202c + 202d" each separately and gave each one a "Name" the way I liked it. Point is, you can't SEE any characters in the Character Viewer for 202e + 202c + 202d - you just enter seemingly empty spaces, i.e. the code points for 202e + 202c + 202d are typographically invisible: NO glyph + NO width. But it is essential to enter these "flowers in the sky" like code points in the left column you are editing.
3) Save and Enjoy…

You seem to enter "Nothing - but code points" - to the effect of "esreveR" typographically. Would be great to have this feature officially! But then better as "Directionality Markers" please…

ED: sorry had to edit the code points…

by Windsor
Hello HE

I tried as you directed me. Same results: the word disappears!

So, this is what I did:
1. I added in the first box by dragging and dropping the 202C and next to it where there is another box I typed R-T-L Override : esreveR
2. Repeated to the next two boxes, first by pressing on the + box.

I opened a new file and typed my name.

Selected the word and in Insert menu -> Special Characters -> Writing -> chose R-T-L Override : esreveR (with nothing to the left of it)

it is more like tagging - enter: Nisus "RLO"Writer"PDF" Pro - then you will get "Nisus retirW Pro". I.e. you enter the "RLO" code point as start tag and the "PDF" code point as end tag and will get the "esreveR" effect displayed between the tags. Hope this helps somehow.

BTW: one surely could enter this kind of tagging via "start & end tag" directly from "Character Viewer" as well!

by Windsor
I am sorry, Elbrecht:

Now, it's more complicated for me. Can you tell me what did you type in the first box, and the second box? When I say box I mean that there are two boxes in the Edit Special Characters, after I press on + there pops a box with ?? in it (two question marks), and they're highlighted. So, what do I type in there, and then when I press tab, I am taken to the next box, and what do I type in there? I am assuming I need to have three rows, right?

Any way, I tested and this time the selected word was replaced by the words in the first box…!

Unicode is strictly plain text - for tricks as esreveR you place invisible code points within the text to get the text engine do the job. My screen shot has seemingly EMPTY "boxes" in the first column, but there I entered the invisible code points, so no wonder. In the "boxes" of the second column you are free to enter whatever - and there's no third column…

In the case of "Nisus retirW Pro" you just enter: "invisibleRLO"Writer"invisiblePDF" and you are done - try it with Character Viewer first…

ED: sorry had to edit the code points given in my message before! There are actually some more code points to try for different tricks - so I would ask Martin to add the whole group(s) of Unicode Format characters: "200c thru 200f" plus "2028 thru 202f" - and future NWP users will get ready to take any flight wheresoever. 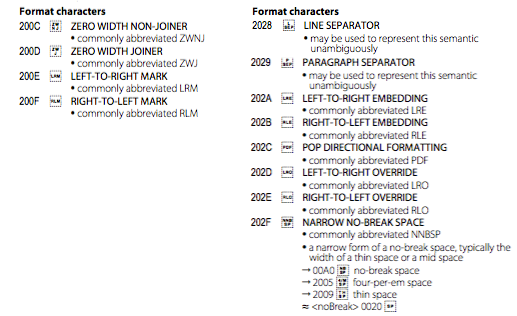 "Fact Is Fiction — And Fiction Is Fact"
YANAGIDA Seizan

I am sorry for not able to get it, yet. I have asked a friend of mine who is Genius at Apple Store (here in Glendale, California) and we tried to follow your screen shots and your guidance, and we were at loss! I am attaching a screen shot of the page and would like to ask you what would you type in the box that has double question mark (??)

When we looked at your screen shots, we saw a line that we couldn't figure out how did you manage to have it show like that: In the Writing submenu you have Reverse : O-L-R and this line is crossing from the first to the second boxes!!!

So, if you may, could you tell me what to type in the box that has double question mark (??) Here is the screen shot.
Thanks HE
Windsor

your screenshot is TOO small in size - but I guess the trouble is with entering "invisible code points" in the first/left column. I did it from "PopChar" - but "Character Viewer" will do as well. Problem is, you have to click in the field of the "Nisus Menu to enter" first and to double-click the invisible character in "Character Viewer" next - with NO click in time between, because the double-click in "Character Viewer" will enter the "invisible character" in the cursor place clicked JUST before. Second problem is you won't see any character entered in the first column of the Nisus Menu - because the character entered is an "invisible code point". That's just about all I can help you with - Ulrich, who is used to tricks like this, did succeed in first try. But I understand that to be too tricky for others maybe - so Martin should maybe help with integrating "Format characters" like this into the "NWP Insert Menu"…

by Windsor
Hello HE:

I apologize for the size of the screen shot I sent you. I had to, because of the limit on the size of attachments.

Second… I gave up with this project!

I tried to double click, nothing happened. I tried POP CHAR, which didn't show me the desired 202e, etc. characters (I know they don't show, but at least it should be there).

I am thinking, may be there is something wrong with my laptop (MacBook Pro, running SnowLeopard), because when I double click nothing happens, not even an empty space. When I drag and drop, still nothing happens! Because I have realized with I double click on Macintosh HD to open it, it does NOT open it. I have to cmd-o to open it. There are hidden problems I am not aware of…